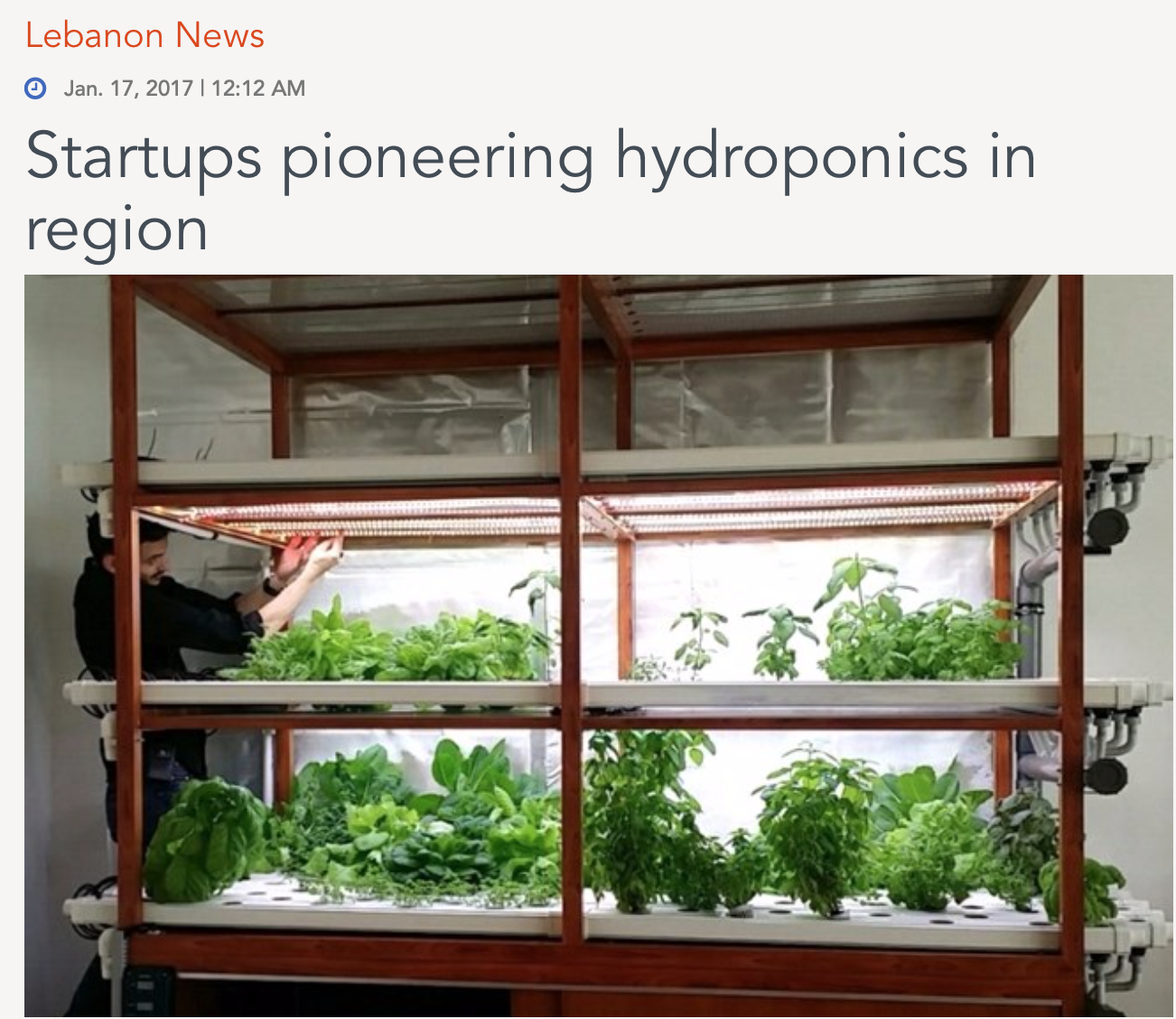 BEIRUT: Lack of space and harsh environmental conditions often translate into limited farming opportunities, but several Lebanese companies are tackling the problem with a farming method allowing plants to grow without soil. Hydroponics is at the heart of a number of futuristic green initiatives set to bring agriculture to previously hostile environments. Plants cultivated by means of hydroponic agriculture are suspended in a water solution, enriched with the necessary nutrients. By controlling the temperature and nutrients’ concentration to match the needs of a specific crop, hydroponic farms are able to cultivate any kind of plants, including those that would not survive in the natural environment.

LifeLab is one of the companies pioneering this farming revolution in Lebanon. The startup won the Hyundai Startup Competition in 2015 and was recently commissioned to create its first hydroponic farm on 400 square meters in the northern Koura area. Crops on the farm grow nestled in “Live Cubes” that extend vertically and horizontally.

“We are about to see the onset of a new breed of farmers,” Ali Makhzoum, chief executive of LifeLab, told The Daily Star.

“For decades we have seen farmers throwing away their crops [due to a bad harvest]. We wanted to find a solution to this.”

According to Makhzoum, taking advantage of space through hydroponics can increase a farm’s output by a factor of 15. In addition, by recapturing run-off water that is not taken up by the plants and reusing it, what he calls “super farms” can save up to 95 percent of the water they use.

Each of LifeLab’s “Live Cubes” is a fully controlled environment, meaning there is no need for pesticides. The plants’ growth is monitored by sensors that send live updates both to the farmer and LifeLab through a custom-made app.

Through the app, both parties are able to monitor the crops’ optimal growth and control temperatures and nutrients levels.

Given the high degree of computerization, this method of farming requires a smaller workforce.

However, Makhzoum believes technology will attract new generations to farming. “The sons of farmers do not want to continue an activity that is physically tiring and does not pay much,” Makhzoum said.

“If we want to reverse this trend we have to innovate.”

Tarek Khoury, the owner of the hydroponic farm in Koura, confirmed that discovering new ways of farming is what kept him interested in his family business. “I started with my own small organic farm and I wanted to expand it by using hydroponic farming,” Khoury told The Daily Star. Khoury heard about LifeLab’s work when they won the Hyundai Startup Competition, and decided to make an investment.

To date, Khoury has set up the first 100 square meters of his “super farm.” While its cost is still relatively high – in the range of $175 per square meter – Khoury believes the cost will be recovered in a little over a year.

“I wanted to invest in something that could help Lebanon as well,” Khoury said, adding that the hydroponic farming saves water, increases the food output and eliminates the use of pesticides and hormones currently employed in farming to increase its profitability.

Hydroponics and vertical farming are also pioneered by the Lebanese company Eco Industries in other countries in the region.

According to Naomi Debbas, daughter of CEO Roy Debbas, Eco Industries is successfully selling its technology in Dubai, where products from hydroponic farms are more competitive on the market thanks to the absence of transportation costs.

Hydroponics is at the heart of another company whose aim is to bring nature back into urban environments. Thanks to the invention of a sponge-like fibrous “smart hydroponic skin” that allows complete temperature insulation, Green Studios is able to grow all types of plants in extreme climates – both indoors and outdoors, horizontally and vertically.

“There is so much unexplored vertical and horizontal space in cities, for example on roofs and on building facades,” Jamil Corbani, CEO of Green Studios, told The Daily Star. “Vegetation not only decreases the carbon dioxide in the air, but insulates the buildings from both the cold and the heat and allows the residents to save on energy consumption.”

Urban community gardens are already gaining popularity in Europe. By tweaking available technology and inventing the fibrous skin layer to protect plants from harsher climates, Corbani’s team won the Massachusetts Institute of Technology Enterprise Forum for the Pan Arab region in 2011 and pioneered the urban garden concept in the Middle East.

At present, a vertical garden costs an average of $350 per square meter, mainly due to the presence of sensors that monitor the plants’ nutritional levels. However, Corbani is confident prices will go down as sales increase.

In future, as the technology becomes more widespread, hydroponic farms also have the potential to become lifesavers in conflict and post-conflict scenarios, enabling postwar agricultural development and providing a sustainable livelihood to populations displaced or under siege.

While Green Studios targets cities, Corbani sees the potential benefit of this technology in contexts such as refugee camps. “If horizontal gardens were placed on top of the tents, this would give them both insulation and a sustainable source of livelihoods,” Corbani said. “[Refugees] would also have the opportunity to become pioneers in this innovative field.”